So, incase you’ve been well, living on Mars or even Pluto… Our fave Aussie’s, 5 Seconds of Summer only gone and released their first official autobiography “Hey, Let’s Make a Band!: The Official 5SOS Book”

The bands autobiography was released earlier this month, shortly after supporting super-band One Direction on their worldwide Where We Are stadium tour (ever so casually.) 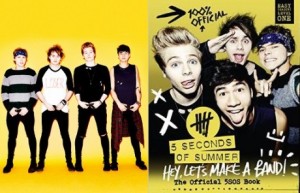 It seems like only yesterday, I was introduced to these four crazy Aussies by a friend, now they’re worldwide superstars, playing to sold out arenas and stadiums all the time *wipes away proud tears*.

Speaking about the book, the lads had this to say:

“The people who gave us the opportunity were the fans. So this book is like a thank you. We want everyone to know the story of how four western Sydney teenagers picked up their instruments and dreamt of being one of the biggest bands in the world. There’s also some embarrassing photos of us dicking around and some facts that some of us didn’t even know. So we hope you enjoy it!”

Well boys, you are one of the biggest bands in the world and all that ‘dicking about’ has certainly paid off!

Fancy getting your hands on a copy of the snazzy book, hot off the press? Of course you do! Click here.