2017 has been a year of ups and downs. Right now, I’m currently sat at my desk and I honestly don’t know where this post is going so please be patient with me, I’m often like this – I hit writers block & once I’m in the zone, I can’t stop. So much has happened this past year, at times the year has felt incredibly slow and then at times felt as though I was travelling on Concorde to out of space with no way of slowing down. Quite scary at times, almost as though I was not in control of my own life which was unbelievably scary.

January 2017, I embarked on my first proper holiday with a friend (my first one was a disaster but that’s a whole different blog post, I might do that one day). Laura & I went to Benidorm. I know what you’re thinking, I was thinking it the second I booked the holiday! Now let me tell you, it is not what you think it’s like. The TV show is not like the place, we went with prejudgements based on the ITV show Benidorm but my gosh we were wrong. We fell in love with a beautiful place which is represented in the completely wrong way. We hired motorbikes and went into the National Park most days and just relaxed on our balcony with either a soft drink or you guessed it, a bottle of Prosecco.

Just a couple of days after flying home, I passed my driving test too. What a way to kick off 2017!

Fast forward to April 1st, my little cousin Charlie turned three and he finally had his birthday party that he had been telling me about for months. It was such a perfect day and it was so wonderful to be able to celebrate with him and watch him grow up. I love how there’s an eighteen year age gap between us both, I think it makes me appreciate him so much more and the time I spend with him. However, he has so much energy. He loves soft play centres and I can’t put into words how much I hate them. Screaming kids are not my idea of fun and Charlie always finds a way to drag me into the play area. I always suggest the museum because we both love the museum. He knows the name of every dinosaur and planet. He’s such an intelligent young boy, I picked him up from school at the end of the last academic year before he left and as I’m an Education Studies Graduate, his teacher was going through his progress with me and it’s clear to see he is going to go far!

I also started my undergraduate dissertation in April. MY GOSH! It was stressful but so worth it. My research topic was How Does The Impact Of War And Terrorism Affect Society And Development? something which I’m extremely passionate about. I got a First for my dissertation and have full legal rights to publish it – so hopefully it’ll be out somewhere soon! I couldn’t have done any of it without Dr Manel Herat at Liverpool Hope University though, she is truly one of a kind. Throughout my four years at the University, Manel was always there as a shoulder to cry on. She wasn’t just there to chat about work, she would always ask about life outside of Uni and my health (read more here) – something I will always be grateful for.

May was a bittersweet month. I finished University after four long years. I handed in my dissertation, sat my final exams and I was done. I could relax. All my hard work was now over and it was now in the hands of the examiners.

However, this month was not as happy as it was appearing. May 11th was a sad day for our family. I woke up to the news that our beloved boy, Henry had passed away in the early hours whilst with a family friend as my Mum was currently on holiday. The news you never want to hear. Especially when your Mum isn’t around. I didn’t know what I was feeling other than heartbreak and frustration. How could this happen. I went to see him that morning and was happy to see how relaxed he looked. Henry was getting old, he was a British Bull Dog so we knew the life expectancy was around 8-10 years but it’s a day you wish never comes and I never want to face that day again. It’s our first Christmas without him this year which is no doubt going to be hard. He always used to lie underneath the Christmas tree as though he was a present, which he was. He was our present. Our other dogs Hetty and Ethel are still a bit confused I think, I’m not sure they know what’s happened.

I graduated just before my birthday on July 18th in Liverpool Cathedral which was an amazing day. I had my family and of course, Charlie there watching me pick up my Degree. I always said I was never going to attend to Graduation but I’m so glad I did. It was one of the best days, celebrating my success with friends after all of our hard work.

Weirdly, I also bumped into Louis Tomlinson in Manchester City Centre. Now, I’ve followed Louis during his music career and I’m a huge fan of his solo music and One Direction, so I was over the moon. He’s such a nice guy. His mum, Johannah followed me on Twitter and we used to chat now and then about life & my writing and I ALWAYS used to tell her that her children were a credit to her and I truly meant it. Johannah was a remarkable woman, somebody who left a lasting legacy. 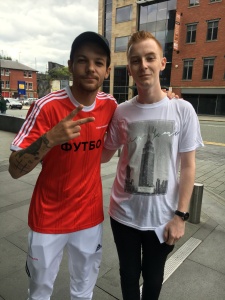 The next few weeks were pretty bland until early August, I surprised everybody with the shock announcement of the birth of my nephew. I kept it off social media because my sister didn’t really post about being pregnant so therefore I had no right to discuss it without her permission. I still don’t post pictures of him online without her permission, none of my family do. I think this is the right thing to do, I always ask friends and family if I can upload pictures with them to social media because some just don’t like it – something everybody should respect!

September was CRAZY! I done backstage press at Fusion Fest in Liverpool & to hang out around the likes of Little Mix, MO, Naughty Boy, New Hope Club & The Vamps – you know, pretty casual? I also interviewed my mates New Hope Club which you can watch here:

A few days went by and I moved to Sheffield and started my Masters Degree in International Journalism at Sheffield Hallam University. I feel so at home up here, coming up to visit Josh & Phoebe all the time just made Sheffield feel like a second home to me so moving here just felt natural and starting an MA in Journalism was the next step in my career. I’ve been writing for print media and online for the past five years for Lifestyle, Maximum Pop! & Booked Magazine and I wanted to know more about the industry I work in. 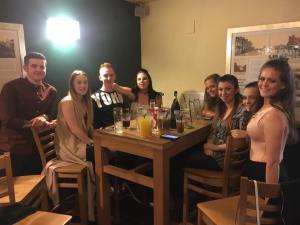 I had some idea what the course involved but not a clear idea. However, since starting I’ve fallen in love with it. I’ve been involved in Radio Journalism and a weekly radio show listen here which I have thoroughly enjoyed. I never thought I would enjoy radio and I never thought of a career in it. However, after being taught by BBC Radio 5 Live Senior Broadcast Journalist Philo Holland – this has now changed. I’ve grown to love radio and it’s now a career I’m thinking of. I’ve interviewed Jade English who was on this years The Apprentice who is lovely! I can’t wait to catch up with her again in the New Year. Oh did I mention I had Liam Payne on one of my shows too?! No biggie… 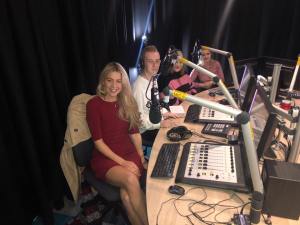 I sadly also said goodbye to one of my bestfriends who moved to Thailand and left me in England (cheers Evez!) – we had some laughs during our time together at Uni, including a lot of day-drinking sessions which turned out to be some of the best days I’ve had and I honestly don’t know where I’d be without Evez. She’s a star. Check her blog out, she spills all the details about life as a TEFL teacher in Thailand, the good and the bad!

Since living here I’ve enjoyed every minute, I’ve had friends from home come & stay for nights out and it’s so lovely being able to have my own place and just relax. Now I’m looking at studying a PhD and staying up here in Sheffield after my Masters. A few people never thought I would never complete my undergraduate degree, but here I am, contemplating a PhD.

Sorry to go on so much, I did warn you. Have a wonderful Christmas and a Successful New Year.
Dan. x